The dynamics and impacts of sarcoptic mange on Yellowstone's wolves 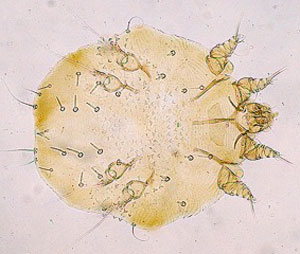 Figure 2. Photographs, taken from the plane and ground, have been extremely useful for detecting and scoring individuals' infections with mange. Photo credits: NPS & Doug McLaughlin. 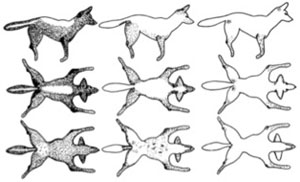 ×
Figure 4. An example of how we record infection patterns from photographs or field observations. The sketches depict the locations of hair-loss on this Gardner Pack pup. This pup was classified as having "Class 2" mange. 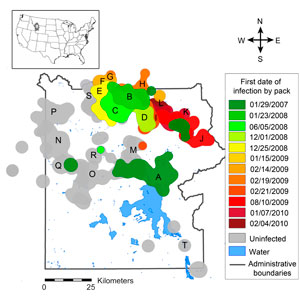 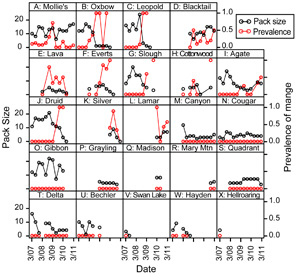 ×
Figure 6. Time series of pack sizes and mange prevalence (class 1, 2 or 3) corresponding to packs displayed on the map in Figure 5. Pack size and prevalence estimates were conducted in March, July and November of every year since the invasion of mange. Packs U–X are not displayed on the map as they remained uninfected, had disappeared, or were not located +/- three months surrounding the last documented pack infection. (Reprinted from Almberg et al. 2012. Parasite invasion following host reintroduction: A case study of Yellowstone's wolves. Philos Trans R Soc Lond, Ser B: Biol Sci 367, 2840-2851.) 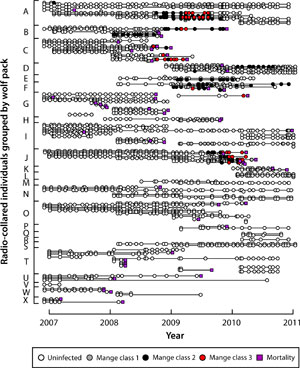 ×
Figure 7. Mange status of radio-collared individuals within packs over time. Each horizontal line is an individual tracked over time with their mange status denoted each time they are observed. Individuals are grouped by pack, the letters of which correspond to the packs displayed in figures 5 and 6. (Reprinted from Almberg et al. 2012. Parasite invasion following host reintroduction: A case study of Yellowstone's wolves. Philos Trans R Soc Lond, Ser B: Biol Sci 367, 2840-2851.) 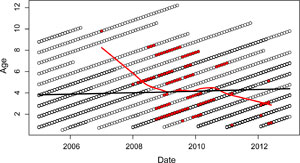 Sarcoptes scabiei, the mite that causes the skin infection known as sarcoptic mange, was introduced to the Greater Yellowstone Ecosystem as a biological control agent aimed at eliminating wolves during the predator control era in the early 1900s.

Although the mite is globally distributed and was at least present throughout parts of Canada in the early 1900s, to date, we have no evidence that it was locally present prior to its release by state veterinarians.

Following the eradication of wolves from the ecosystem in the 1930s, mange is thought to have persisted within the regional furbearer populations (coyotes, foxes, etc.).

Wolves were reintroduced in 1995 and 1996 to Yellowstone National Park, and mange began appearing in wolves outside of Yellowstone in 2002. By the early winter of 2007, mange had invaded the park's wolves (Fig 1 & 2).

Sarcoptes scabiei is primarily transmitted through direct contact, although the mite can survive for short periods of time off a host and may be spread through contact with contaminated bedding or feeding sites. Sarcoptes scabiei burrows into its host's epithelium and triggers an allergic reaction that causes severe itchiness, resulting in the thickening of skin, hair loss, and in secondary infections.

Morbidity and mortality vary among species and individuals and is partly based on regional climate. Some studies have found evidence for limited, short-term immunity following recovery.

Unlike most infectious diseases, mange causes obvious visible symptoms of infection. Thus, our research revolves around tracking the appearance, spread, and recovery from mange-induced hairless lesions.

Each month, field crews attempt to observe or photograph all radio-collared individuals and their pack mates within Yellowstone National Park for the purpose of scoring infection status. Individuals are scored as either uninfected or as class 1-3 (Figure 3) based on visible lesions and scratching behavior.

Who gets infected and why?

While this analysis is ongoing, it appears as though there are no significant patterns for age, sex, coat-color, or social status. However, we are seeing some patterns of infection that suggests the dynamics of the infection may be changing now that mange has been circulating within our population for some time.

One such change is that the age profile of severely infected individuals is shifting towards younger animals (Figure 8). This pattern is consistent with either acquired immunity or a "frailty effect" where particularly susceptible individuals (due to genetics or general condition) are selected against early on in the epidemic. Since some of our other analyses suggest that previous infection is not protective against re-infection, we believe this pattern is driven by the frailty effect. This suggests that the 'resistant' individuals that made it through the initial epidemic have gone on to populate the older age classes within the population, and thus it is primarily the young animals now that progress to more severe infections.

How does mange affect Yellowstone's wolves?

The costs of mange are several-fold. Infected individuals that suffer from hair-loss must expend much more energy to thermoregulate and keep sufficiently warm during winter months. Infected animals spend considerable amounts time scratching, which detracts from other activities including resting or effective hunting.

Although it is difficult to estimate, the energetic costs of mounting an immune response, both to the mites and to fighting secondary infections associated with skin damage must also drain resources from infected individuals. If an infection progresses to class 2 or 3, these individuals are typically in poor shape and are more likely to spend time away from their pack.

Using the data collected thus far, we now know that individuals with class 2/3 infections are roughly twice as likely to die as an uninfected individual, and that the greatest risk of mortality for these individuals is during the cold winter months.

Furthermore, while this analysis is ongoing, we have evidence that having lots of extra healthy pack mates can significantly reduce an infected individual's risk of mortality.

Are there genetic or immunological markers that predict which individuals are more likely to become infected or progress to severe infections?

Can we tease apart the effects of mites from the decline in prey on the population dynamics of Yellowstone's wolves?