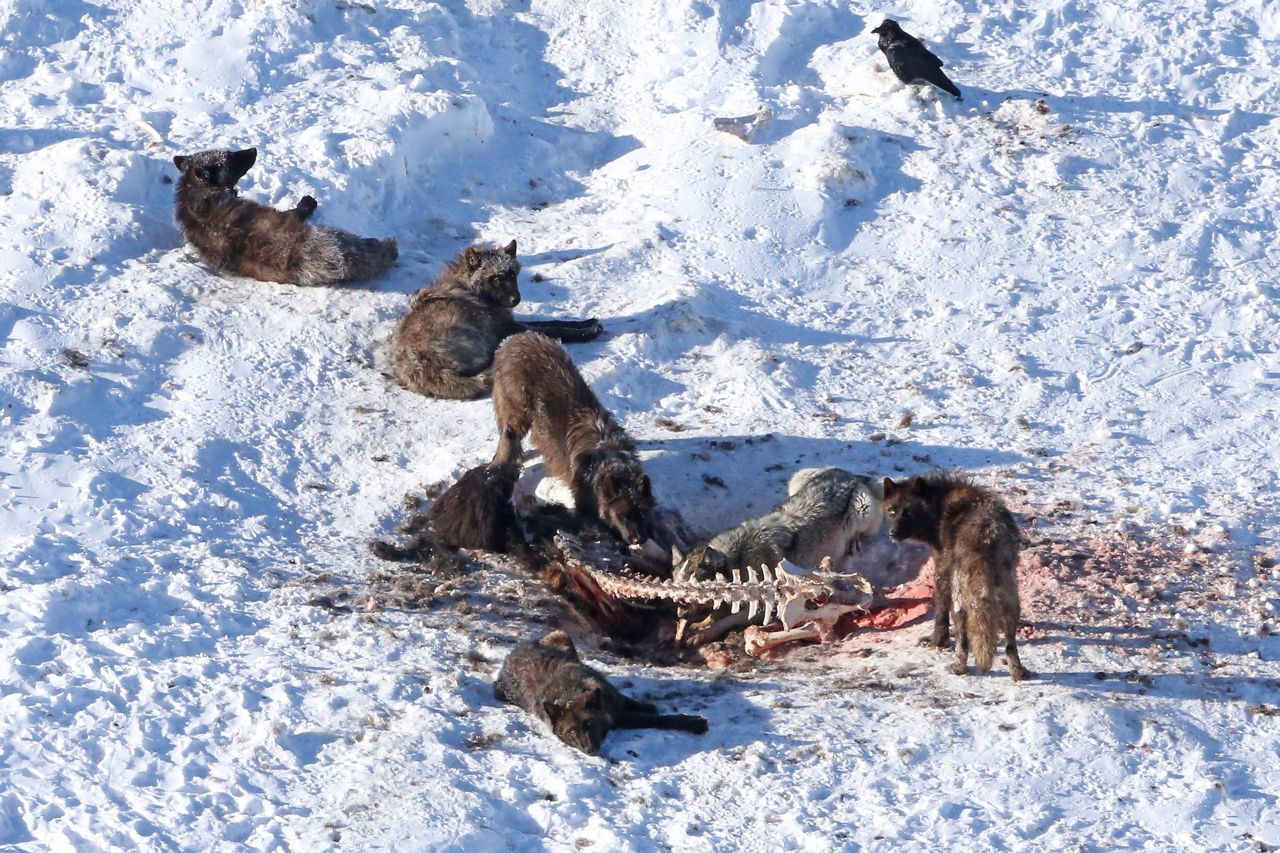 The Mollie’s pack was originally called the Crystal Creek pack and included some of the original translocated wolves from the Yellowstone reintroduction effort in 1995. As the Crystal Creek pack, they were displaced from their territory in 1996 by the Druid Peak pack and relocated to Pelican Valley, in the park’s interior. Limited ungulates remain in the interior during the winter so this pack learned to specialize on hunting bison. Wolf kills provide carcasses that are utilized by a variety of scavengers, including grizzly bears. Unique behavior, including hunting bison and regular interactions with bears, prompted the long-term Pelican Valley study where wolf, bison, and bear interactions are documented. In 2000, none of the original pack members remained and the pack consistently inhabited Pelican Valley. This prompted the renaming of the pack in honor of the late Mollie Beattie, Director of the US Fish and Wildlife Service during the wolf reintroduction. Having been a pack for over 15 years, there has been significant turn-over in the pack composition, pack size, and alpha individuals. 980M, after being in the position of alpha male for numerous years, died in August 2015 (most likely cause was being kicked by an elk). 890M joined the pack from Junction Butte in 2016 and is potentially the new alpha male, mate to 779F who became alpha female in 2014 (but also bred in 2013). Pups born from 2014-2016 are most likely pups from 779F. The Mollie’s Pack spends the majority of its time in the Pelican Valley area, with common trips into Lamar Valley in the winter. In March 2017, 4 wolves had thin tails and potential low severity mange infections. It is probable that Mollie's pups from 2017 did not survive, and at the moment we are uncertain about the age breakdown of all individuals in the pack. 779F died in April 2018, likely from an elk or bison injury during a hunt in Lamar Valley. As of winter 2018/2019, only 2 gray pups are still with Mollies. We cannot be sure who mothered these pups. The Mollie's pack had 5 pups in 2019, 4 of which survived to the end of the year. A gray yearling was harvested in Wyoming during the 2019 hunting season. At end of 2019 the pack consisted of 10 wolves. [Updated: 1/2020]