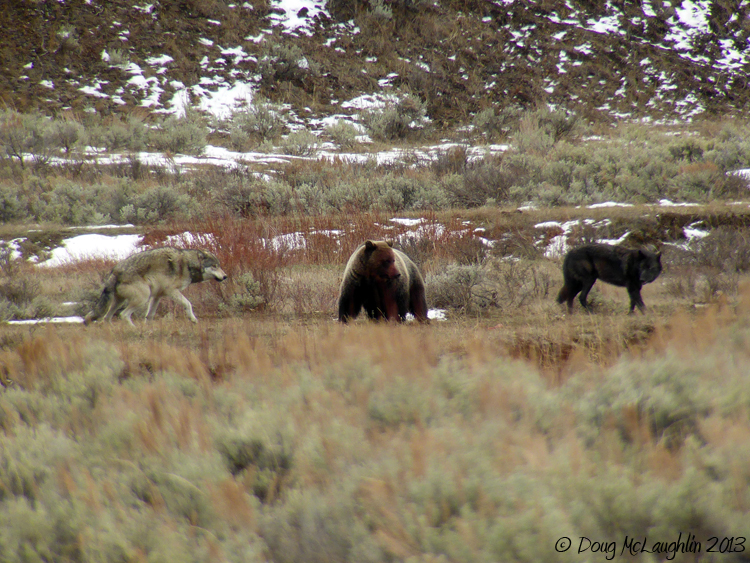 After the Druid Peak pack dissolved in February 2010, the Lamar Canyon pack formed and would eventually take over the historic Druid Peak pack territory. The three original adults included the alpha female from the Lava Creek pack known as “06 Female” (later fitted with a radio collar and identified as 832F), and two brothers that were briefly associated with the Druid Peak pack (755M Lamar Canyon alpha & 754M). Two radio-collared wolves, including the alpha female (832F) and the beta-male (754M), were legally harvested in Wyoming in late 2012. A new alpha pair replaced 832F and 755M, who subsequently left the pack. By August 2013, the pack consisted of 8 wolves including the alpha pair (“Big Gray” and “Middle Gray”) a subordinate adult female (“The Black Female”), a previous pack-member (859M), and two black pups. By September 2013, the pack dissolved and the fate of most of the wolves was unknown. “Big Gray” and “The Black Female” remained together as the new alpha pair and only pack members. In January 2014, both wolves were radio-collared as 925M (“Big Gray”) and 926F (“The Black Female”). The pair produced six pups in 2014. In March of 2015, 925M was killed by Prospect Peak wolves and 926F began associating with several Prospect Peak pack males (“Twin,” 965M, “Dark Black,” and “Mottled Black”). Lamar wolves suffered from severe mange in 2016, when they lost two litters of pups and multiple wolves dispersed back to the Beartooth Pack east of the Park. By the end of 2016, they were down for 4 (949M, 926F, "Little T", "Dot") wolves with slight mange infections. Little T and 926F were both bred by 949M in 2017, but we saw no pups emerge after denning – probably due to canine distemper virus. 949M died from a combination of mange, canine distemper, and emaciation in August 2017. As of 2018, Little T has displayed dominance over her mother and become alpha female. We witnessed 5 black pups survive from the 2018 breeding season (the first surviving litter in 3 years)! It is unclear whether Little T or 926F are the mother (or both). Throughout winter, however, it was clear only 2 pups survived. 926F was legally harvested east of the park in the Montana harvest in November 2018. The Lamars denned successfully in 2019 and produced at least 4 pups which survived to the end of the year. The pack is seen occasionally in Round Prairie and east Lamar Valley. The Lamar Canyon pack is no longer considered a YNP wolf pack. [Updated 5/4/2020]